What Spike Proteins Do To Your Body 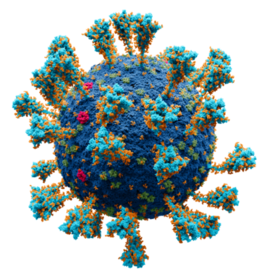 Why Are There Natural Health Protocols To Protect You From Spike Proteins?

What are they and how do they affect your body?

When you get an Mrna injection, 40 trillion messenger RNA molecules are injected into the arm.  The mRNA packages are collected by the lymphatics and absorbed into your cells around blood vessels- the place for absorption happens in the capillary vessels.

These little packages of injected mRNA genes are absorbed into the cells of your blood vessels, called the vascular endothelium. The injected packages open, the genes are released and the body gets to work reading the genes, manufacturing trillions and trillions of spike proteins.

Usually, the body recognizes the spike proteins as a foreign protein and makes antibodies against it- so you are then protected against a corona virus- that’s the idea.

But here is where the problem comes…..

In a corona virus, the spike protein becomes a part of the cell walls around the virus…but in this case, its not “in a virus”- it’s in your endothelial cells.

So, spike proteins become part of the cell walls of the vascular endothelium in your body, which means the cells that line your blood vessels which are supposed to be smooth, allowing blood to flow smoothly, now have little spikey bits (spike proteins) sticking up.

It is absolutely inevitable that blood clots will form because your blood platelets circulate around your vessels, and the purpose of blood platelets is to detect a damaged vessel and block that vessel to stop bleeding.

When the platelet comes through the capillary, it suddenly hits all these covid spikes that are jutting out from your blood vessel- it is absolutely inevitable that a blood clot will form to block that vessel- that’s how platelets work

Spike proteins will cause blood clots

How to prove it….

The clots we are talking about here are microscopic- tiny, literally on a capillary level, and they are scattered throughout your entire capillary network, so they are not going to show on any scan, they are too small and too scattered.

The only way to find out for sure is to do a blood test called a D-Dimer.    D-Dimer doesn’t show anything else but a recent blood clot.

In Dr Charles Hoff’s research, He is testing those that have had the injection within 4-7 days and then doing the blood test called the D- Dimer.  Results are showing 62% of people with evidence of clots.

The most alarming thing about this is that there are some parts of your body, like your heart muscle, your brain, your spinal cord, and your lungs that cannot regenerate.

When those tissues are damaged by blocked vessels, they are permanently damaged.

Injected people are being Diagnosed with Reduced Effort Tolerance- healthy people are getting out of breath much more easily than they used to, someone that could walk 2 miles without a problem, can’t walk a 1/4 of a mile without getting out of breath. These people with RET – literally what has happened to them, is they have plugged up thousands of tiny capillaries in their lungs as explained above.

It is not just concerning, the terrifying thing about this is not just that they are out of breath and can’t do what they use to do. But once you block off a significant number of blood vessels in your lungs, your heart now has to pump against a much greater resistance to get the blood through your lungs- and that causes a condition called Pulmonary Artery Hypertension.    It’s like high blood pressure in your lungs.  The blood can’t get through because so many of the vessels are blocked.  The terrifying thing about this is that people with PAH usually die of right-sided heart failure within 3 years.

These injections are causing permanent damage and the worst is yet to come.  The long-term outlook is very grim, as with each successive shot the damage is going to add and add and add because you are eventually getting more and more damaged capillaries.

This site is not designed to and does not provide medical advice, professional diagnosis, treatment or services to you or to any other individual.  Through this site and linkages to other sites, Naturally Energised Nutrition provides general information for educational purposes only.  The information provided on this site or through linkages to other sites, is not a substitute for a professional consultation and you should not use the information in place of a visit, Skype consultation or the personalised advice of your health care provider.  Naturally Energised Nutrition is not liable or responsible for any advise, course of treatment, diagnosis or any other information, services or product you obtain through this site.